Come On Ride The TERROR TRAIN

Jamie Lee Curtis made three slasher films immediately after HALLOWEEN'S success in 1978 and 1979. The first was PROM NIGHT, a very dated and poorly paced movie that has more ironic fans (thanks, disco dancing Leslie Nielsen!) than legitimate ones. The most famous is probably 1981's HALLOWEEN II, which picked up directly after the events of the first film, which meant she spent most of the movie in a hospital bed. And then in the middle is TERROR TRAIN, probably the least seen of the trio but also - in my opinion - the best of them as well.

Like PROM NIGHT, it starts with a tragic accident, as Alana (Jamie Lee) and some of her college pals (mostly frat guys/med students led by Hart "Ellis" Bochner) trick a virginal nerdy kid named Kenny Hampson into thinking he's about to get laid, only for him to discover his "girlfriend" is actually a corpse from their medical lab. Kenny suffers a psychotic break, and then we cut to a few years later when the group has rented an excursion train to celebrate New Year's as well as Alana's early graduation. Everyone is in costumes for some reason (is that a New Year's thing?), allowing the killer to hide in plain sight among the revelers as he wipes out everyone involved with Kenny's prank.

But the killer isn't your average Michael Myers or Ghostface, choosing one costume to associate himself with. No, instead he continually takes the costume of his last victim, which causes confusion among the core group ("Ed? I just saw him!" someone says about a character who died a half hour earlier) and allows people to keep letting their guard down throughout the film. One victim, believing the killer to be a would-be hookup (there's a lot of casual cheating going on; had they survived these people would definitely have monthly key parties), actually drags *him* off into seclusion, and poor Jamie Lee is fooled even in the climax, running toward the safety of someone she believes is the train conductor. The film has an inordinate number of offscreen deaths - perhaps due to the MPAA? - but it allows director Roger Spottiswoode to throw a few surprises our way.

It also ties into the film's theme of misdirection, emphasized by none other than David Copperfield as a magician that has been hired (or HAS HE?) by the group for entertainment. Unlike modern films that use CGI and other trickery for magic scenes, this 1979 production had only Copperfield's legitimate skills at their disposal for the most part, and Spottiswoode doesn't even cut to reactions more often than not, letting the tricks unfold more or less as they would on stage. Copperfield’s Magician (occasionally referred to as Ken, but billed simply as “The Magician”) doesn't perform any of his grand illusions, instead sticking mostly to card and sleight of hand tricks (the cigarette through the quarter still impresses me, not gonna lie), but the effect still works, and (spoiler) all of it works as a pretty good distraction for the identity of the killer. At least two victims are killed in plain sight of dozens of onlookers, something you can't quite imagine Jason or "Harry Warden" being able to pull off.

That's just one of many interesting elements about the film that makes up for its lapses (slowish pace, the aforementioned abundance of off-screen kills). It was certainly a fascinating (re)watch in 2020, where I had to laugh at my initial recoil over seeing two people hug, not to mention the plot of packing into a cramped train for a party. After nearly a year of varying degrees of lockdown, I have noticed that I occasionally look at such behavior in movies the same way I do when I see a character smoke indoors or casually use homophobic/racial slurs. "What were they thinking back then," I ponder, "Look at these people hugging and not wearing masks!" Unlike indoor smoking and off-the-cuff bigotry this will presumably/hopefully be a temporary thing to "date" our movies, but for now it sure is strange to look at "people just having fun" as something taboo.

On the subject of homophobia, one thing about TERROR TRAIN that has gone relatively under the radar is that it's a potential stepping stone for queer cinema. Again with the spoilers here (skip the rest of this paragraph if you haven't seen it yet!), but the male killer spends most of the movie rather convincingly dressed as a woman*, and Bochner's character Doc is potentially in love with Alana's boyfriend Mo. When Mo and Alana have a fight, Doc says to him "Well you'll always have me," which Mo chuckles at as if it was a kind of self-deprecating joke, but Doc's expression and added "I mean it" tells us that he is in fact, serious. He also attempts to get them to break up, and when Mo is killed it's the only time he displays any sort of regret or concern for the tragic events of the evening (which are largely his fault, as the primary instigator of the prank to begin with). Not as overt as FREDDY'S REVENGE, no, but there's definitely a little more going on here than you'd find in any other slasher of the 1980-1982 golden era, at least that I've seen.

So while it comes up a bit short in some areas, this now forty year old (!) slasher has managed to remain relevant while so many others of the time have dated too poorly for anyone to bother trying to "discover" now. The relative lack of on-screen violence and blood is more in line with HALLOWEEN (the film was indeed pitched as "HALLOWEEN on a train"), so if you're not interested in the high body counts and gore of the majority of its successors (including HALLOWEEN II) this will be more up your alley. The New Year's Eve angle is incredibly limited, yes, but it's given me an excuse to revisit it around this time just about every year since it came out on Blu-ray, and every time I find more things about it to appreciate. If you've never seen it, or written it off from a viewing as a younger and less wise fan, there's no better time to hop on board. 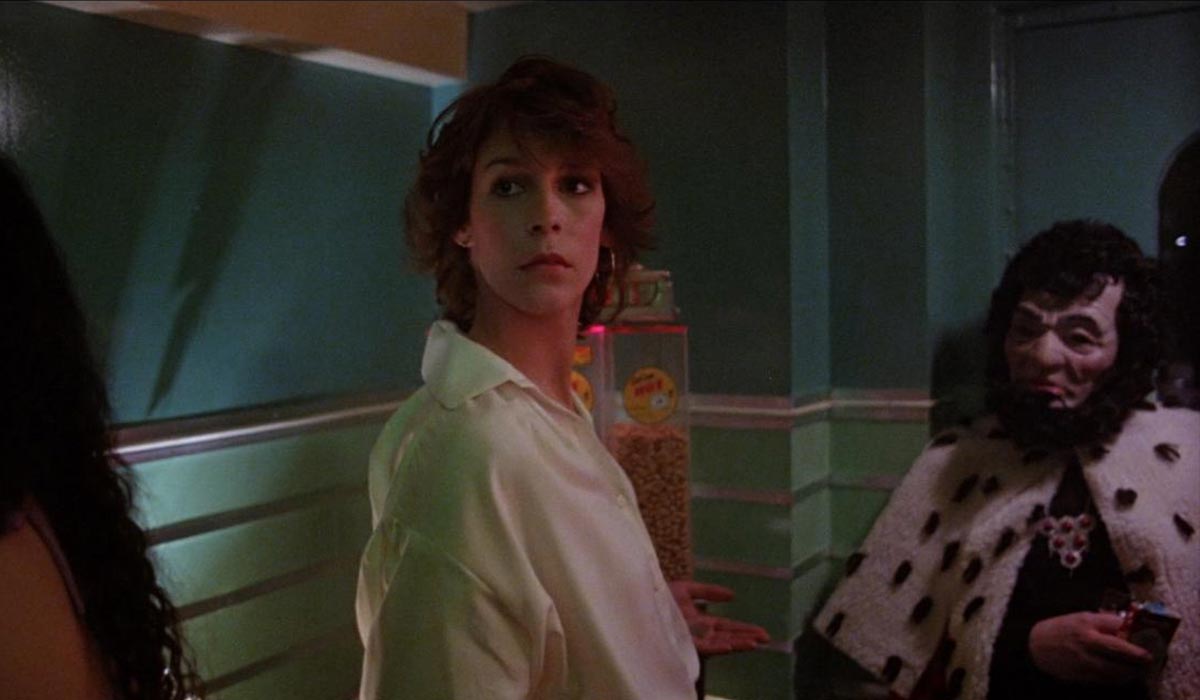 *Slightly less convincing in high def, alas. While the camera usually puts "her" in medium/long shots, there is one particular semi-close one that, freed of the murkiness and blurriness of VHS, makes it pretty clear that the face matches the one we saw on Kenny in the film's prologue.