MEMORIES OF MURDER And Ambiguous Endings

NOTE: This article contains spoilers for all films mentioned within, including Memories of Murder and the recent The Little Things. Read at your own risk!

Serial killer movies tend to more or less follow a template: an opening murder, the introduction of our heroes, the discovery that this murder is actually the ___th in a series, the breakthrough clue (perhaps from another would-be victim managing to escape), etc, etc. And then our heroes catch the culprit (or, on occasion, he’ll turn himself in) and justice is served in some way. The sub-genre is popular for a reason: it gives horror fans something akin to an “elevated” slasher film, but also tends to rope in the very same people who scoff at slashers because, well, serial killer films usually have A-list casts. Some even win Oscars.

But these films, while usually inspired in some way by this or that true crime case (Ed Gein managed to inspire Psycho, Texas Chain Saw Massacre, AND Silence of the Lambs), tend to be otherwise fictional tales, allowing a bit of guilt-free escapism that might be lacking in a docudrama about these actual psychopaths. There’s little doubt that Clarice will capture Buffalo Bill, or that Cary Elwes can escape the combined powers of Ashley Judd and Morgan Freeman, so audiences are free to munch their popcorn and not think too much about any potential ickiness that might arise when you consider how these movies were dreamed up in the first place.

However, every now and then there is a movie that splits the bill and attempts to make traditional entertainment out of a real life case that remains unsolved. This week the good folks at Criterion have added Bong Joon Ho’s classic Memories of Murder to their esteemed collection, presenting the film on Blu-ray for the first time in the US, backed by a terrific transfer and several hours of bonus features; you’d need to take the day off if you wanted to go through it all in one go. It’s been a long time coming for the Oscar winning filmmaker’s second and, according to some (including me) best film, though in a weird way it was worth the wait due to updates to the actual crimes that inspired it. 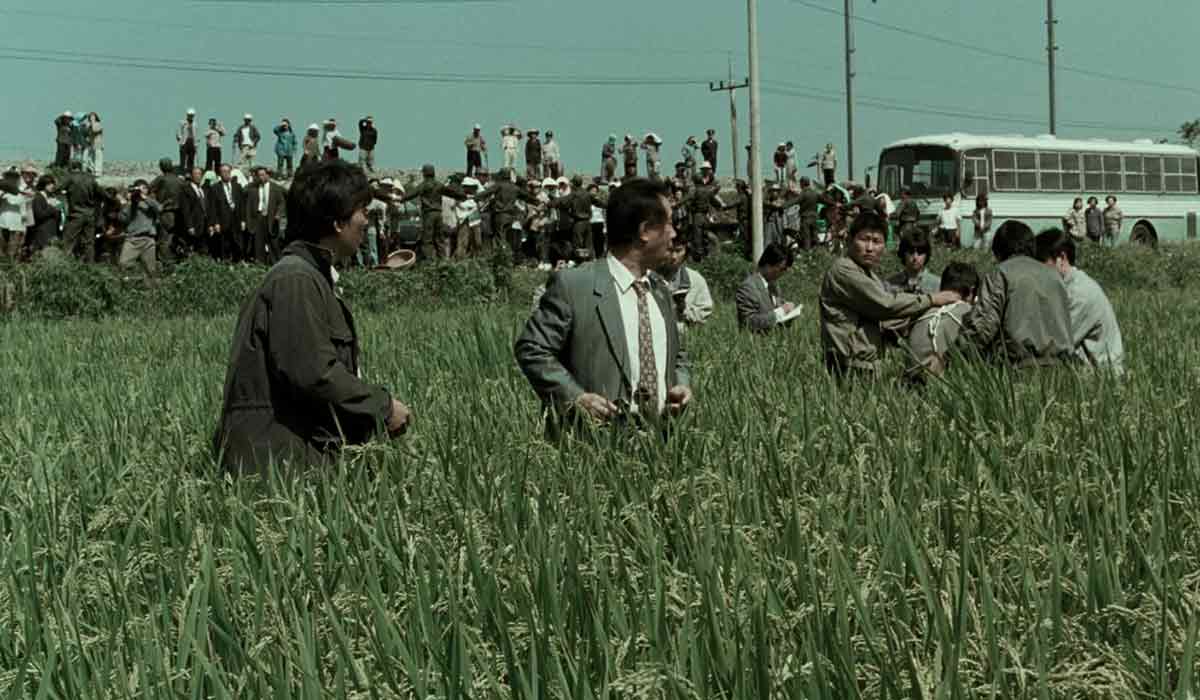 For those unfamiliar with the film, it is set in the 1980s and based on real life serial killings that occurred in the South Korean city of Hwaseong, which is largely farmland and had never dealt with anything like that before (and thankfully hasn’t since). The killer murdered ten women (ranging in age from 14 to 71) over a period of just under five years, and despite millions of man hours spent on the case (with a reported 21,000 suspects questioned) he was never caught or identified by the time Bong made his film in 2003. Bong researched the case for six months before he even began writing his screenplay, which speaks to how entrenched he was in its details.

Rather than make up a solution (which fictionalizes some elements but keeps others almost to the letter, including the dates/locations of some of the murders) the Memories of Murder screenplay reflects its real life ambiguity. Throughout the film, protagonist Detective Park (Kang-ho Song, in the first of his many collaborations with director Bong) is seen resorting to outlandish and illegal practices in order to find the killer, including planting evidence and beating confessions out of anyone who fits the bill as a suspect, only for the level-headed Detective Seo (Kim Sang-kyung) to clear the suspect on this or that bit of legitimate police work. When they finally get a suspect they both agree on, he is cleared via DNA evidence at the last minute, prompting Seo to snap and Park to quit the force altogether. With no other suspects, they’re no closer to solving the case than they were at the beginning.

The film’s haunting final scene takes place several years later, as Park has become a salesman and is living a normal life with a family. When a sales job takes him near the location of the first body, he walks to the spot and it’s clear the case still haunts him, something that isn’t helped when a young girl informs him that another man had been looking at that same spot earlier. Park realizes the killer is still out there, and then turns to look directly at the camera, as if he spotted his nemesis in the theater watching the recreation of his crimes. Bong has explained that he felt the real killer probably would have seen the film, and that he wanted him to feel like he was locking eyes with his pursuer.

Turns out that the filmmaker’s instincts were spot on, because while he was enjoying the festival tour for Parasite in 2019, the case was finally solved. A man named Lee Chun-jae - already in jail for another, unrelated murder - confessed to all of the killings, and reportedly said he saw the film three times but felt nothing as he watched simulated versions of his horrible actions. Bong’s thoughts on this “better late than never” news found their way into the supplements for this disc, so while the film may end ambiguously, the bonus features offer up closure for those who are interested.

It’s the rare sort of (for lack of a better word) happy ending for one of these notorious “unsolved” serial killer cases, many of which have also been turned into films with endings that mirror the real life frustration the police and the victims’ families have felt since the events occurred. David Fincher’s Zodiac, which mirrors Memories of Murder in many ways (including their surprising bits of humor), stays true to the real life case, leaving its trio of heroes (Jake Gylenhaal, Mark Ruffalo, and Robert Downey Jr) without resolution to the murders that terrorized San Francisco in the late 1960s and early 1970s.

The success of Fincher’s Seven loomed heavily over the film at the time of its release, with some expecting the director to deliver the same kind of dark thrills. But that’s not really what the filmmaker was going for this time, and that is perhaps why the film unfortunately flopped at the box office (in fact it’s the lowest grossing film of his career). Over time it has been discovered by more and more fans, many of whom now consider it to be one of his best films. But even if the film was a giant smash, it doesn’t change the fact that the renewed interest in the case failed to yield any new viable suspects, let alone a positive identification for the murderer, who is probably dead by now given how much time has passed.

Though at least that’s a “probably”. The Texarkana “Moonlight Murders”, a case that mirrors the Zodiac in several ways, can almost certainly move into “definitely” territory, as the murders occurred in the 1940s and witness descriptions placed the perpetrator in his late 30s or 40s. A suspect named Youell Swinney has long been touted as the most likely culprit, though he was never charged nor was his guilt ever proven, so it doesn’t quite cut it as closure. The 1976 film The Town That Dreaded Sundown, which was heavily inspired by (but, like Memories of Murder, did not strictly adhere to) the facts of the case, ended with an unnerving meta scene of the still-unidentified killer standing in line to see the film, without the subtlety that Bong Hoon So offered with his own chilling suggestion that he could be in the audience with the rest of us. 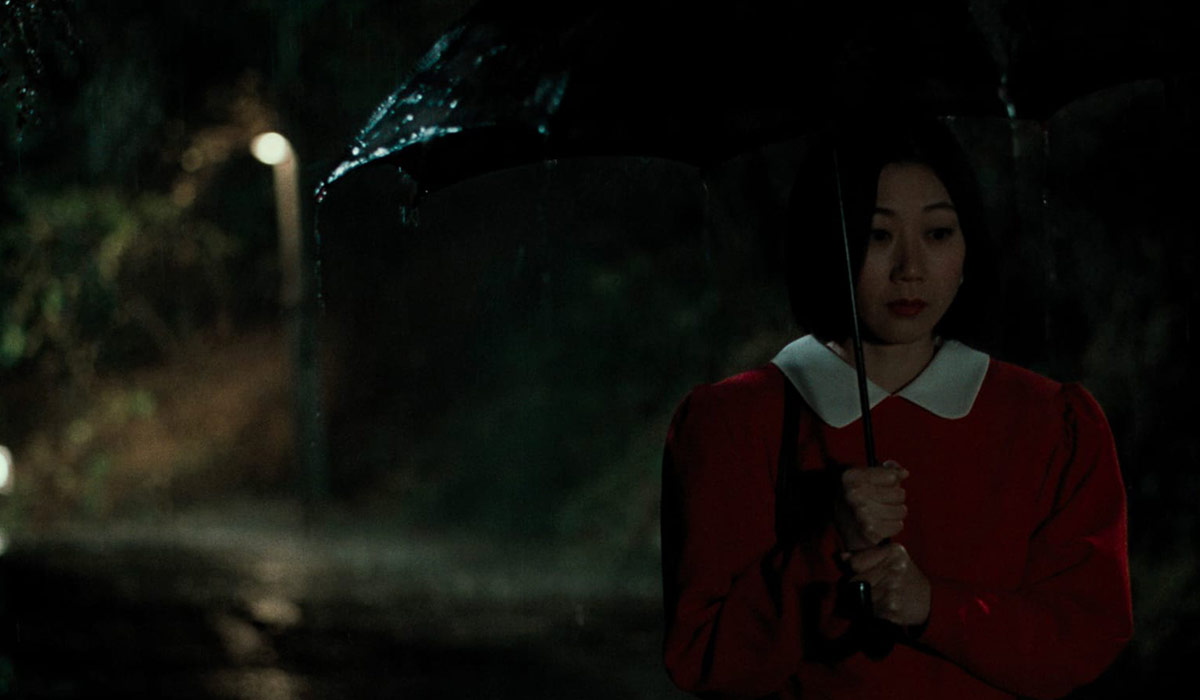 No such fear occurs when watching a Jack the Ripper movie, thankfully; barring vampirism or some other kind of immortal status, the Whitechapel killer is definitely dead by now. And probably has been for nearly a hundred years at this point, which is perhaps why so many films have taken more liberties with his story than you see for the other unsolved serial killer cases. Time travel has been invoked for more than one film, and many of them (including 2001’s From Hell, perhaps the most lavish production ever afforded for the murderer) offer a solution that in real life is often debunked by this or that bit of conflicting evidence. At this point a real twist would be for one of these films to end ambiguously, instead of pointing the finger at someone who is likely innocent.

It’s rare to see the “non ending” in wholly fictional movies. One of the few exceptions is this year’s The Little Things, in which Denzel Washington and Rami Malek hunt a killer in Los Angeles in the early 1990s (it definitely makes me feel very old that period pieces are established with posters for movies I saw theatrically or video games I vividly recall pumping quarters into). The film only really offers one suspect for the killings, played by Jared Leto, but in the final reel we learn that despite him “fitting” as a suspect, there’s really nothing to prove he was the culprit. This forces Denzel to create some closure for Malek’s character just to ease his mind, knowing that while maybe Leto WAS the killer and simply that good at covering up his tracks, there’s still a chance the actual criminal was still out there.

The movie is a decent enough time killer, but the ending was unsurprisingly hated by many folks who saw it, and I can’t help but wonder if it’s because the plot was entirely fictional. With the films about the Zodiac or Hwaseong murders, ending ambiguously might frustrate some viewers, but it was the correct way to go, because at the time of the films’ productions, their respective real world cases had no answers either. However, when everything is made up, as it was in this film, there is no apparent/easy excuse for the lack of resolution.

Ultimately there’s no right or wrong way to do these things; it might seem crass to fictionalize cases that are still open (and have grieving family members still seeking answers), but on the flipside these films inspire more interest in the real stories, which in turn might help them get solved. While the actual murderer has yet to be caught or identified, the films about the West Memphis Three resulted in both the interest and monetary funds (for lawyers) that at least set the innocent men free. Likewise, I can’t help but think that Bong Soon Ho’s meteoric career path helped keep the story of the Hwaseong murders from fading into memory, as every time he gains new fans (as he did with the likes of The Host and Snowpiercer) it led to more people discovering Memories of Murder and subsequently googling “who was the real killer?” These films might feel a bit more terrifying when they end on a question mark, but if it inadvertently helps lead to a real answer thanks to amateur sleuths or detectives from other areas who saw the film and decided to lend a hand, then I say let’s keep them coming, and save the Hollywood endings for the ones that were wholly dreamed up by their screenwriters.